The new EU Benchmarks Regulation (BMR) was published in June 2016 and most rules will apply as of 1 January 2018. The BMR introduces new compliance requirements for benchmark administrators, contributors, and users, with regard to interest rate, foreign exchange, security, commodity, and other benchmarks used in financial transactions. The BMR was enacted in response to public pressure resulting from the aftermath of the LIBOR scandals and follows the recommendations of the IOSCO and ESMA EBA Principles. Like many EU financial services regulations does also the BMR have an extraterritorial reach and apply to US based benchmark providers and contributors. This post will give an overview about how US-based financial market participants will be affected by the BMR.

What is a Benchmark?

A benchmark is defined as

Such an index is a figure, fulfilling one of the following criteria:

Such an index is a figure, fulfilling one of the following criteria:

Derivatives as defined in Section C, Annex I, Directive 2014/65/EU do not qualify as an index where there is only a single reference value. Such is the case where a single price or value is used as a reference for a financial instrument, e.g. the reference price for a future or option, without any calculation, input data or discretion. The exclusion does not cover, e.g. a basket of securities or an index based on the price of more than one financial instrument. Equally, reference or settlement prices produced by central counterparties are not considered to be benchmarks. The setting and reviewing weights within a combination of benchmarks, which is generally also only based on a simple average or similar figure if any, does not involve discretion and is thus not considered to be the provision of a benchmark.

Who will be affected?

While the IOSCO Principles are the basis of the BMR, the Principles included the concept of “comply or explain”; this exemption with respect to proportionality and the nature of the benchmark is only included to a limited extent in the BMR. In order to comply with the new Regulation, administrators of a benchmark will either have to apply for registration or for authorisation, depending on the type of benchmark they provide. The provision of critical and significant benchmarks, as well as commodity and interest rate benchmarks, requires an application, while in all other cases registered with the designated authority will suffice. 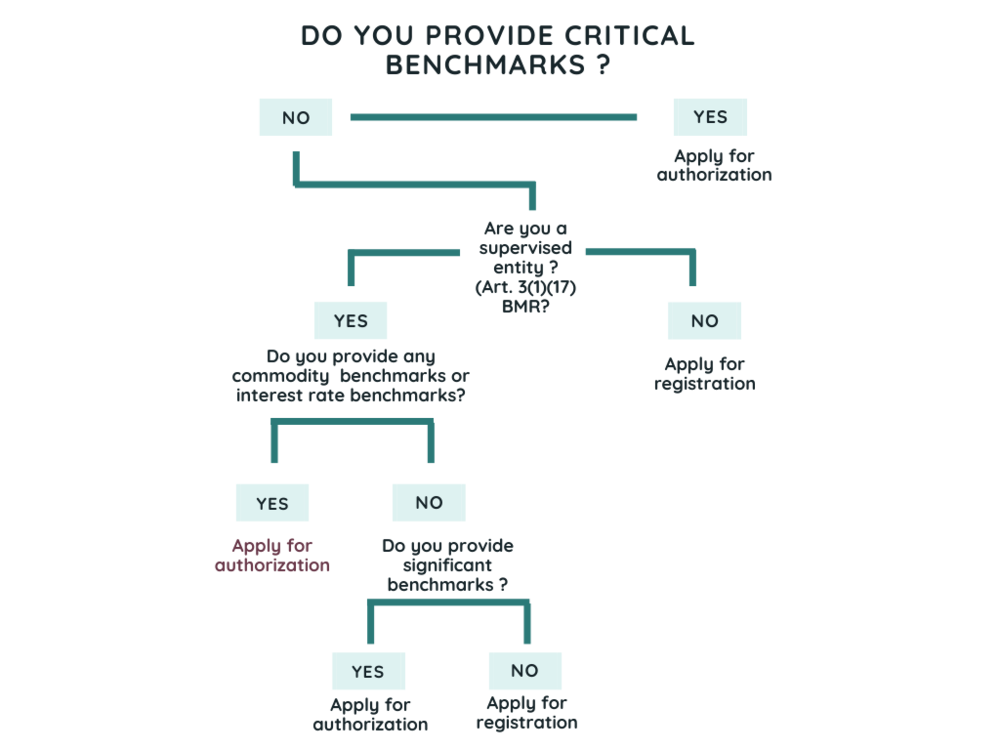 (Supervised) Contributors: The two types of contributors are differentiated in that any natural person or legal entity can contribute input data as a “contributor”, but only a “supervised contributor” can contribute input data to an administrator located in the EU as a supervised entity and the contributor has to comply with more stringent requirements, in accordance with Article 16 BMR. The quality and reliability of any benchmark is based on the integrity and accuracy of the input data, which is provided by the contributor. To prevent manipulation at data contribution level, contributors are subject to stringent rules under the BMR. The administrator has to ensure contributors adhere to the code of conduct and that input data is of the required integrity and can be validated, even if the contributor is located in a third country. Any omission by a contributor providing input data to a critical benchmark can undermine the credibility and representativeness of such a benchmark, with severe impact on the underlying market and economic reality. As such, national authorities are given the power to demand mandatory contributions from supervised contributors to critical benchmarks.

Which benchmarks will be affected?

Regulated Data Benchmark: Data input for the benchmark is provided directly from regulated venues. Certain provisions of the BMR do not apply to regulated data benchmarks, and they cannot be classified as critical.

Interest Rate Benchmark: An IR Benchmark is determined on the basis of the rate at which banks may lend or borrow from other banks or agents in the money markets. They are subject to the requirements set out in Annex I BMR. Provisions of the BMR relating to significant and non-significant benchmarks do not apply.

Commodities Benchmark: The basis for the benchmark is a commodity as defined by MiFID II. Commodity Benchmarks are subject to the requirements of Annex II BMR, unless the benchmark also qualifies a regulated data benchmark, or is based on submissions from mainly supervised entities. Provisions of the BMR relating to significant and non-significant benchmarks do not apply.

Critical Benchmark: To qualify as a critical benchmark, the value of the underlying contracts needs to be at least EUR 500 bn, or it has to have been recognised as critical in a member state. Critical benchmarks are subject to more stringent and specific requirements than other types of benchmarks. A framework has been developed by ESMA to determine Interbank Offered Rates benchmarks (IBORs) and the Euro Over Night Index Average (EONIA) as critical benchmarks. To date, only EURIBOR has been qualified as such by the EC.

Significant Benchmark: Requires the value of underlying contracts to be at least EUR 50 bn, or there to be none or very few market-led substitutes, leading to significant impact on financial stability, if the benchmark ceases to be produced.